Acacia Across the Nation

With over 30 chapters and counting across the country, Acacia is constantly improving in our mission of “preparing tomorrow’s leader”. Our cutting edge membership program is designed to develop your inborn talents, giving you the tools you need to have an impact on your community after graduation. To do this, our organization brings together a diverse group of likeminded individuals and pairs them with our success proven undergraduate program to promote excellence in academics, leadership, and service.

As a collective, we are a group of engineers, entrepreneurs, politicians, businessmen and, most importantly, brothers. We are each others active resource and support for any and all challenges that college provides us. On campus, we strive to be leaders in our respective fields, service, as well as student organizations. Many professors at campuses around the country are themselves members of our fine fraternity, and a healthy network of thousands of alumni are always eager to help.

The Acacia Club was established on December 8, 1903,  as a social group for any student or faculty member who had been “Raised” as a Third Degree Master Mason. Three years later, on May 18, 1906, the University of Minnesota Acacia Club officially became the 11th Chapter of Acacia International Fraternity. For almost 70 years, Acacia thrived at the University until the mid-1970’s when the Chapter closed due to lack of membership. Although a brief recolonization took place from 1983-93, the time was not yet ripe for Acacia to return. 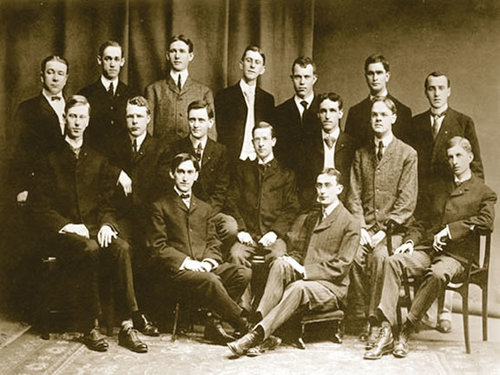 What are your letters? Acacia is the only founding member of the National Interfraternity Council to choose a full Greek word as its name rather than a few letters. Our name, Acacia, comes from the Greek word AKAKIA which has several different meanings. Acacia means “distinctiveness and leadership among men”, “brotherhood”, and “strength and ruggedness of the spirit”.
Acacia was founded in 1904 by 14 Master Masons at the University of Michigan. Today it is a strong international fraternity, with Chapters at more than 40 universities across the United States and one in Canada. Over 50,000 university men have called themselves Acacians, including prominent figures such as Senators, university presidents, state governors, and Nobel Laureates. Famous Acacia alumni include: President William Howard Taft, William Jennings Bryan, Cliff Hillegas (founder of Cliff’s Notes), Wes Santee (former Gold Medal distance runner), and Harold Edgerton (Nobel Prize in Physics).
The Ohio State chapter of Acacia was founded March 25, 1906 by the captain of the football team and some of his friends. The chapter lived in a few houses before finally moving to the current house on Woodruff Ave in 1984.
Over the years, the Ohio State chapter has built a strong brotherhood on the foundation of diversity and tradition. The Ohio State chapter has initiated over 1200 brothers since we were founded on this campus. Our chapter has developed a strong tradition, but we have avoided fostering a stereotype. We believe that when a brother joins Acacia, he should not have to give up his individuality. Instead, that brother will be able to enhance the brotherhood with his own ideas.
This strong tradition of brotherhood was reflected in our Centennial Celebration, which drew over 130 alumni and their families back to Columbus in March 2006. At Centennial, we launched our $30,000 capital campaign to further improve the chapter house and ensure our chapter’s financial security for years to come. With approximately 12 active brothers, Acacia is slightly smaller than the average Ohio State fraternity size. Our fraternity is, therefore, able to offer every member the chance to develop their own leadership abilities as officers and as brothers. At Acacia, we have formed strong bonds of friendship which often cannot be found in some of the larger houses on this campus.
Our house philosophy is to balance academics while having fun. Not only have brothers achieved high academic honors, but our house GPA is well above the university average. Perhaps the most appealing factor about a fraternity is its social program. We have a full social calendar of parties, date nights, mixers, and formals. On average, we will have four large parties and two formals every semester, with additional brotherhood events and mixers thrown in.